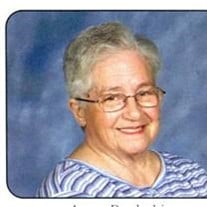 Celebration of Life services for Agnes Davy Duplechin, 80, will be held at 1:00 p.m., Saturday, January 26, 2013, in the sanctuary of St. Theodore Catholic Church, Moss Bluff, LA., with Monsignor Charles Dubois officiating under the direction of Hixson Funeral Home, DeRidder, LA. Interment will immediately follow on the grounds of Ritchie Cemetery, Moss Bluff, LA. The family would like to accept guests for visitation Friday, January 25, 2013, from 5 p.m. until 10 p.m. and Saturday, January 26, 2013, from 8 a.m. until 11 a.m. at Hixson Funeral Home, DeRidder, LA. Agnes was born February 5, 1932, in Egan, LA, to the late Paul and Onezima Thibodeaux Davy. She was called to be with her Lord on Thursday, January 24th of 2013 in Dequincy, LA. Her greatest accomplishment was graduating high school in 1987, ten years after her youngest child. Agnes lived in Moss Bluff for 30 years, moved to Ragley around 1980 then to Longville by her daughter in 2005. She moved into the Care Center of Dequincy in 2010. She loved quilting, cooking, baking, dancing, having company, listening to French music, hearing her boys play music and loved all her children, grandchildren and great grandchildren. Agnes never had an enemy and never met a stranger. She cherished her family, friends and acquaintances. A very devout Catholic, Mrs. Duplechin belonged to St. Theodore Catholic Church prior to moving to Ragley, and then called St Piux Catholic Church her home church. She is probably most remembered in Moss Bluff for working at C&A Café, across from Sam Houston, in the 1970's. She was famous for making her signature rice dressing (or dirty rice) for the Civitan Club meetings every Wednesday night. She was known for her quilt-making; the quality and love that came with it when she gave it to you. Mrs. Duplechin was preceded in death by; her parents, her beloved husband, Mr. Wilfred Duplechin, three sisters, 2 brothers, one cherished son Patrick Charles Duplechin, and one dear granddaughter, Destiny DeAnn Mahaffey. Left to cherish Agnes' beautiful memories is: her daughter, Trish Duplechin Laborde and husband Ricky of DeRidder La. Her sons: Harrol Duplechin and wife Lavon of Rosepine, La, Warren Duplechin and wife Carolyn of Topsy, LA, and J. W. Duplechin and wife Beverly of Rosepine, LA. Her Grandchildren: Samantha Robinson of Longville, LA, Morris Duplechin and wife Monica of Longville, La, Callie Robertson and husband, Brad of DeRidder, La, Donna Reynolds and husband Steven of Topsy, La, Corey, Ethan, and Ashley Duplechin of Rosepine, La, Beverly Angelo and husband Pat of Lake Charles, La, Brent Duplechin and wife Kelly of Rosepine, La. Her Great grandchildren; Lanie, Lexie, Ella Marie, and Addelyn Duplechin, Karleigh, Kaden, and Konner Reynolds, Paige and Abby Robertson. Many extended family members and hosts of wonderful friends. Honoring Agnes as pallbearers will be Shannon Dougherty, Randy Hickman, Ebbie Perkins, Don Merle, Merrell Bailey and Richard Young. You may share your prayers and condolences with the Duplechin family by visiting our online register at www.hixsonfuneral.com.

The family of Agnes Davy Duplechin created this Life Tributes page to make it easy to share your memories.

Celebration of Life services for Agnes Davy Duplechin, 80, will...

Send flowers to the Duplechin family.