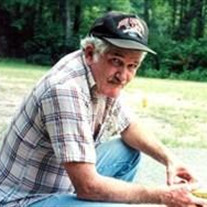 Celebration of Life services for Mr. Alfred Richard James, 77, of Leesville, will be held Wednesday, February 27, 2013, at 3pm in the Chapel of Hixson Funeral Home of DeRidder, LA. Interment will follow immediately on the grounds of Old Cypress Cemetery in Rosepine, LA. The family would like to welcome guest for visitation on Tuesday, February 26, 2013 from 5pm-9pm and again from 9 am until time of services at 3pm in the chapel at Hixson Funeral Home in DeRidder, LA. Mr. Alfred "Dick" James was born on August 20th 1935 in Whitmire, South Carolina to Mr. Jesse and Mrs. Julia James. He was called home on Friday, February 22, 2013, at his residence in Leesville, LA. Mr. James liked sports, but more importantly he loved keeping in touch with his family and friends. Alfred was loved by all. Mr. James was dedicated to the military, retiring as a Sergeant First Class, after more than 20 years of faithful service in the United States Army during both the Korean and Vietnam wars. He was a loving son, husband, father, grandfather, great grandfather, a decorated soldier and he will be greatly missed by all who knew him. Mr. James is preceded in Death by his wife, Mrs. Tommie Ruth Burnett James; his parents; a brother, Mr. Frank James and his sister, Ms. Bobbie South. Left to cherish his wonderful memories are his children; Mark James and wife Phyllis; Rickey Burnett and wife Tina; Dale Runge and wife Karen; Tony Burnett and wife Beverly; Deborah Tucker and husband James; and Renee Franklin and husband Mike. Also left to honor him is his brother Jimmy James and wife Becky. He also has a Host of Grandchildren and Great Grandchildren who will forever miss him. Honorary Pallbearers for Mr. Alfred Richard James are Greg Runge, Calvin Runge, T.J. Burnett, Dubbie Burnett, Glen Runge and Joby Boyle. You may express your prayers and condolences to the family by visiting our online register at www.hixsonfuneral.com.

Celebration of Life services for Mr. Alfred Richard James, 77, of Leesville, will be held Wednesday, February 27, 2013, at 3pm in the Chapel of Hixson Funeral Home of DeRidder, LA. Interment will follow immediately on the grounds of Old Cypress... View Obituary & Service Information

The family of Alfred Richard James created this Life Tributes page to make it easy to share your memories.

Send flowers to the James family.