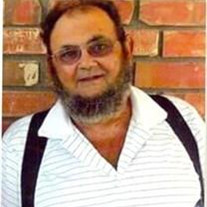 Bobby Doyle, 66, of Robeline, Louisiana entered eternal peace on Sunday, March 15th, 2015 in New Orleans, Louisiana with his loving family by his side. He was a retired skidder operator. He enjoyed hunting, fishing, mud riding, and sitting on... View Obituary & Service Information

The family of Bobby Doyle created this Life Tributes page to make it easy to share your memories.

Send flowers to the Doyle family.