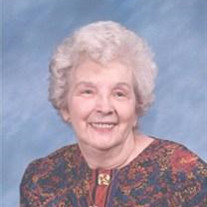 DERIDDER, LA – Celebration of Life services for Earline Smith Lee, 78, will begin at 1:30 p.m. with an Order of the Eastern Star service preceding the memorial service at 2:00 p.m. Monday, July 2, 2012, at First United Methodist Church, DeRidder, LA, with the Rev. Dr. Wayne Evans officiating. The family will be receiving friends for visitation Sunday, July 1, 2012, from the hours of 6-9 p.m. at Hixson Funeral Home, DeRidder, LA. Earline was born July 12, 1933, in DeRidder, LA, to the late Earl T and Charlcie Armes Smith and was called by our Lord to her Heavenly home June 28, 2012, in Sulphur, LA following a lengthy illness. She was a graduate of DeRidder High School in 1952, and McNeese State University in 1956. Earline was in the first nursing class at McNeese. She served this grateful nation by joining the United States Air Force, serving from 1963 to 1971 as a Captain. Earline worked as a nurse at several hospitals in Lake Charles and DeRidder until taking a position as Occupational Health Nurse at Boise Southern Company in DeRidder where she worked until her retirement. After leaving Boise, she served as a nurse at assisted living facilities in Merryville and DeRidder. Earline was a member of the Order of the Eastern Star, Pinehurst Chapter #33, serving in many offices at both the local and state level in that organization. She was extremely involved in Rainbow Girls and served in many capacities. She was a member of the First United Methodist Church in DeRidder volunteering as much as she was able. Earline loved serving God in whatever capacity he wanted her to serve. She loved singing old hymns and she loved listening to southern gospel music. Earline was preceded in death by her parents. Left to cherish Earline's memory and tell her stories will be one brother; Charles C. Smith and wife Emma of Lago Vista, TX, extended family members and many wonderful friends. Honoring Earline as pallbearers will be Vernon Meyers, Dr. Tom Dobbins, James K. Armes, Sterling Presley, Stanley Presley and Husbands of the wives of the Order of Eastern Star, DeRidder Chapter. You may share your prayers and condolences with the family by visiting our online register at www.hixsonfuneral.com.

The family of Earline Lee created this Life Tributes page to make it easy to share your memories.

Send flowers to the Lee family.