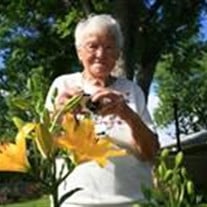 Ester Eblene Kelly September 29, 1916 – June 3, 2011 Ester Eblene Kelly was born to F.M. (Dub) Haynes and Annie Virginia (Jenny) Elliott Haynes, in Murphyresborough, AR. Mrs. Kelly's 94 years were filled with many accomplishments. After graduating Trout-Goodpine High School, she entered college at Northwestern Normal in Natchitoches, LA., where she met Leslie Adam Kelly. They were married on August 1, 1937. After an interruption to raise their children, she completed a BA in Education (1955) and received a Masters in Education from Northwestern State University in 1971. A life-long gardener extordinaire, Mrs. Kelly received her official Master Gardener Certificate after taking the course of study at the age of 89. As a 25- year teacher of many elementary and junior high students and young gardeners, as a "Pink Lady" in the Beauregard Memorial Hospital Auxiliary maintaining the Living Memorial's Book, and as a Master Gardener, she fulfilled her life goal of helping others. As a neighbor, friend, and fellow First Baptist Church member, Mrs. Kelly touched the lives of all who knew her. Living in DeRidder for more than 50 years, most of those as a widow, this community surrounded her with their love and care. Her family is grateful to the people of DeRidder. Preceded in death by her husband, Leslie Kelly, her parents, one sister and two brothers. Eblene Kelly is survived by her children, Leslie Allen Kelly and wife Cathy, Annie Virginia Kelly and husband Eddie Klein, Margaret Sue Kelly and husband Carl Primeaux. Three grandchildren, Tara Kelly Primeaux and husband Shawn Crain, Erin Colleen Kelly and Partner Mairi Ellen Quodomine, Patrick Tiernan Kelly, and Jessie Kelly, mother of Erin and Patrick. She is also survived by her five great-grandchildren, Margeaux Kelly Crane, James Robert Crane, Marcarius Etiene Crane, Christinana Gavrielle Crane, and John David Emmanuel Crane. One brother, M.F. "Junior" Haynes and Dorothy, niece Carole Haynes, as well as many other nieces, nephews and cousins. Services will be held at Hixson Funeral Home on Sunday, June 5, 2011at 2:00, with the Reverend Lindsey Burns and Reverend Jason Ebeyer officiating. Visitation will be 5-7PM on Saturday, June 4, 2011, at Hixson Funeral Home in DeRidder. In Lieu of flowers, memorial gifts may be made to St. Jude hospital, First Baptist Church of DeRidder, or to the Beauregard Council on Aging.

The family of Eblene Kelly created this Life Tributes page to make it easy to share your memories.

Send flowers to the Kelly family.