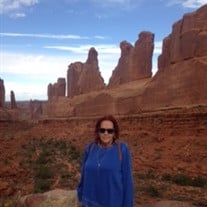 Funeral services for Elizabeth Ann Colletti will be held on Thursday, December 27, 2018 at 12 noon at the DeRidder Funeral Home in DeRidder, Louisiana. Burial will follow at the Rosepine Cemetery, in Rosepine, Louisiana. Visitation will be held on Wednesday, December 26, 2018 from 5 p.m. to 9 p.m. at the DeRidder Funeral Home in DeRidder, La. Elizabeth was born on July 15, 1958 to George Robert and Gloria Elizabeth Clemons Shafer. She passed away on Saturday, December 22, 2018 in Lake Charles, Louisiana after a brief illness. Elizabeth Colletti was born and raised in DeRidder, La. She met her loving husband while working at MasterChef. After getting married to Saverio Joel Colletti, she gave birth to two children, Joel Reece Colletti and Lacey Lee Colletti Davidson. She lived in several different locations throughout her marriage but always called DeRidder, La her home. She spent most of her life working hard, so she could give her children everything she could. She was most proud of her two children and six grandchildren. As she got older, she dedicated her life and time to loving her grandbabies. In the springtime, she could be found at the ballpark cheering on her Angels. They were her best accomplishment. She was preceded in death by her parents, George Robert Shafer and Gloria Elizabeth Clemons Shafer and sisters, Sharon J. Shafer-Miller and Ramona L. Shafer-Davis. She will be loved and missed by her husband, Saverio Colletti of DeRidder, La; son, Joel Reece Colletti and wife, Joy of Rosepine, La; daughter, Lacey Lee Colletti Davidson and husband, John of DeRidder, La; brothers, George Robert Shafer III, Esquire of Scott, La and William “Billy” G. Shafer of DeRidder, La; sisters, Paula Shafer of DeRidder, La and Katherine “Kathy” Shafer-Swift of Magnolia, TX and six grandchildren, Alyssa Bailey Davidson, Ayla MacKenzie Davidson, Aydan Sawyer Davidson, Wyatt Brandon Colletti, Brianna Rose Colletti and Sophia Rayne Colletti.

Funeral services for Elizabeth Ann Colletti will be held on Thursday, December 27, 2018 at 12 noon at the DeRidder Funeral Home in DeRidder, Louisiana. Burial will follow at the Rosepine Cemetery, in Rosepine, Louisiana. Visitation will be... View Obituary & Service Information

The family of Elizabeth Ann Colletti created this Life Tributes page to make it easy to share your memories.

Funeral services for Elizabeth Ann Colletti will be held on Thursday,...

Send flowers to the Colletti family.