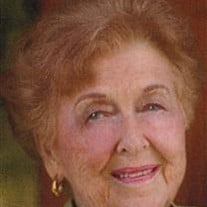 Evelyn Clanton Roberts was an uncommon woman of grace and elegance. Born in 1915, she was 95 years old when she passed from this life to the next on Saturday, January 22, 2011, in DeRidder, Louisiana. Her friends and family knew her as a woman of substance and a Christian of great worth. Evelyn grew up in Florala, Alabama, a small town just north of the Florida border. From her earliest of days, she lived a life filled with music. She loved to share that love with everyone she knew and that became the theme of her life. As a young woman of 23 years old, she rode a train from her home in Alabama and arrived for her first visit to DeRidder to accept a job unseen. When she arrived, she was called upon to teach class orchestra, the marching band, the school chorus, as well as all the choral classes in both elementary and high school. She taught from 1938 until her marriage in 1940 to Cecil Horace "Hoss" Clanton, who owned and operated Sartor-Clanton Motors, Inc. Evelyn and Hoss took great pride in their three sons David, Michael, and Mark. She worked tirelessly as a den mother in Cub Scouts, taught piano lessons, served as a member of the Community Concert Association and was elected as president of the DeRidder Music Club. She also taught Sunday school and worked with choirs in every age group during her more than 70 years as an active member of First Baptist Church. She returned to teaching choral music from 1960 to 1971 at DeRidder High School, and later established a music program at the Beauregard Activity Center in conjunction with the Beauregard Association of Retarded Citizens. In 1980, her husband of 40 years died suddenly and left a void in her life. She threw herself into art to express her deep loss and discovered a new talent and passion. She was asked to give an art show and lecture at the Beauregard Parish Library on her 91st birthday. She later married Sam Roberts, a retired optometrist in 1988. They were married until his death in 1991. Evelyn leaves three sons David McPhail Clanton of Dallas, Texas; Michael Charles Clanton and Mark Alan Clanton, both of DeRidder. She also leaves three step-children Ron Roberts, , Dianne Kendler of DeRidder, and Gail Quarles of Northport, AL. Evelyn had four grandchildren, and four great-grandchildren. The family wishes to acknowledge the loving care provided by her caregivers Beatrice Strickland, Sophia Bailey, Carolyn Johnson, and the staff members at DeQuincy Home Health. We also wish to express appreciation to Dr. Henry Carter, who served as her doctor and friend. Services will be held at the First Baptist Church of DeRidder on Tuesday, January 25, 2011 at 2:00 p.m. Rev. Lindsey Burns will be officiating. Burial will follow in the Beauregard Cemetery in DeRidder under the direction of Hixson Funeral Home of DeRidder. Words of comfort may be shared with the family at www.hixsonfuneral.com

Evelyn Clanton Roberts was an uncommon woman of grace and elegance. Born in 1915, she was 95 years old when she passed from this life to the next on Saturday, January 22, 2011, in DeRidder, Louisiana. Her friends and family knew her as a woman... View Obituary & Service Information

The family of Evelyn Elizabeth Roberts created this Life Tributes page to make it easy to share your memories.

Evelyn Clanton Roberts was an uncommon woman of grace and elegance....

Send flowers to the Roberts family.