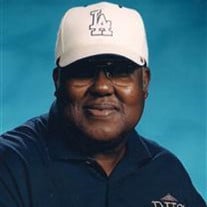 Funeral services for Bro. Willie T. Farrow, Sr., 68 of DeRidder, LA., will be at 1:00 p.m, Saturday, April 30th 2011, at Starlight Missionary Baptist Church in DeRidder, with the Rev. Daniel Stafford officiating. Interment will follow at Beauregard Cemetery, under the direction of Hixson Funeral Home of DeRidder. Visitation will be from 11:00 a.m until 12:45 p.m on Saturday, April 30, 2011, before the funeral at the Starlight Missionary Baptist Church. God called him home on early Sunday morning, April 24,2011. Willie served in the U.S Army for 24 years. He also worked offshore for 3 years after his retirement from the army. He retired from the Beauregard Parish School Board after 18 years of service. He leaves behind to cherish his memory, his loving wife of 40 years, Sis. Azzie L. Farrow; Children: Wynette Farrow and Willie Farrow Jr., both of DeRidder, LA; and Daughter, Aundrea J. Scales and husband Clyde of Houston, TX; Grandchildren, Adrianna L. Scales, Jairus D. Scales, both of Houston, TX., and Kayden L. Bailey of Grand Prairie, TX.; His mother, Rosie L. Davis; Brother, Roosevelt Thomas and wife Crystal; Sister, Shirley Mourning, all of Shreveport, LA and a host of other relatives and friends. Words of comfort may be shared with the family at www.hixsonfuneral.com

The family of Farrow Sr. created this Life Tributes page to make it easy to share your memories.

Send flowers to the Sr. family.