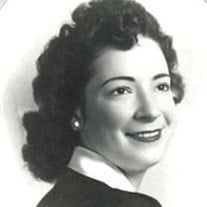 Gernie Glorien Aymond Hyde died on June 6th, 2014 at her home in DeRidder, LA. She was born on August 24, 1922 in Effie, LA where the Aymond family was descended from one of the pioneer families who settled Avoyelles Parish around 1793: Michael Aymond and Catherine Aron of Strasbourg, Alsace, France. Gernie Aymond was the second youngest of nine children born to Alfred and Ollie (Ritchie) Aymond, and was proceeded in death by her parents and all her siblings: Evie Ryland, Ora Shirley, Roy Aymond, Sudie Wiley, Earl Aymond, Erving Aymond, Iris Guillory and Venson (Toby) Aymond. Her life on the sandy hills of Avoyelles Parish were filled with laughter, music and joy. The closeness of the family was reinforced by its annual reunions, held for over 50 years, in which family members would gather and relive the days of old with a traditional hog roast, group singing, and bonding with ever growing family of nieces and nephews. Gernie graduated from Lafarge High School and attended Business College in Pineville, LA. Upon her graduation, she began her career as a Laboratory Technician at the Louisiana State Hospital in Pineville, LA. With the ending of World War II, she meet and married her husband of 67 years, William Leon Hyde, Sr. and began raising her family. In 1961, the Hyde family purchased Esso Distributorship from the late Mr. Pete LaCaze and relocated to DeRidder, LA. She worked alongside her husband, and later in life was joined in the business by their two youngest sons, John and Fred. W.L. Hyde Exxon Distributor was an integral part of DeRidder community for over 50 years. Well into her 80's Mrs. Hyde continued to enjoy weekly bridge games with her lifelong friends, domestic and international tra vel and a deep, unconditional love of her family. For the many stories remembered and shared, her family and friends are grateful for her well lived life. Throughout her life Mrs. Hyde was quite engaged in her community, with civic, church, business and charitable activities, serving as a Cub Scout Den Mother for seven consecutive years, and high school chaperon for many years to recall. Her two most notable achievements, in addition to raising her family and building a successful business, were being a Charter member of the Beauregard Hospital Auxiliary (Pink Ladies) and the Women's Progressive Business Club. She and her family are lifelong members of the First Baptist Church of DeRidder. She is survived by her husband, William Leon Hyde, Sr; four sons, William L. Hyde, Jr., and wife Claire of Dallas, TX, Michael A. Hyde, John L. Hyde and wife Sandy, and Charles A. (Fred) Hyde, all of DeRidder; seven grandchildren; fifteen great grandchildren and one great great grandchild. A Celebration of Life service will be held at Hixson Funeral Home in DeRidder, LA. Visitation will begin on Saturday, June 7th, 2014 from 5:00pm until 8:00 pm and on Sunday, June 8th, 2014 from 1:00 pm until the time of service at 2:00 pm. Interment will follow in Beauregard Cemetery. Pallbearers will be her sons. Memorial contributions in lieu of flowers may be made to Beauregard Hospital Auxiliary

Gernie Glorien Aymond Hyde died on June 6th, 2014 at her home in DeRidder, LA. She was born on August 24, 1922 in Effie, LA where the Aymond family was descended from one of the pioneer families who settled Avoyelles Parish around 1793: Michael... View Obituary & Service Information

The family of Gernie Glorien Hyde created this Life Tributes page to make it easy to share your memories.

Send flowers to the Hyde family.