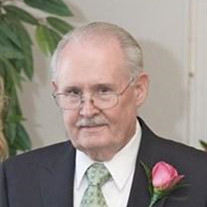 Celebration of Life services for James Edward Porter, 74, will be held Sunday, December 30, 2012, at 2:00 p.m., with Rev. Jerome Hayes officiating in the Hixson Chapel. Interment will immediately follow on the grounds of Beauregard Cemetery, DeRidder, LA. The family would like to welcome guests for visitation Saturday, December 29, 2012, from the hours of 5:00 – 8:00 p.m. and again Sunday, December 30, 2012 from 12:00 p.m. until time of service at Hixson's, DeRidder, LA. Mr. Porter was born April 7, 1938, in DeRidder, LA., to the late Charles Edward and "Bobbie" Beverly Beatrice McCain Porter. He was surrounded by his loving family as God called him home December 27, 2012, in DeRidder, LA. Mr. Porter loved music, and enjoyed playing brass instruments in the DeRidder band. He loved fishing, hunting, LSU football, and the mountains of Cloudcroft, New Mexico always held his heart. Mr. Porter participated as a Mason here in DeRidder and volunteered coaching little league baseball for many years, creating such empowering impressions on so many lives. He served this grateful nation by joining the U.S. NAVY in June of '56 to June of '60. Mr. Porter graduated in 1971 from McNeese with a BS in accounting where he would use his skills to dedicate an accounting career, including sixteen years of employment to IMCAL in accounting and as Executive Director. Upon retirement from IMCAL, April 31, 2012, was declared James Porter Day in the cities of Lake Charles and Sulphur. He enjoyed Real Coke and Blue Bell Ice Cream. Mr. Porter was devoted to being a "Paw-Paw". He was a quiet man, a Christian man that loved his country and God, and a dedicated family man. Mr. Porter was preceded in death by his parents and his only brother, Robert Brian Porter. Left to cherish Mr. Porter's memories will be his beloved wife of fifty-one years, Mrs. Eva Manette Porter, two daughters: Kimberly Hayes and husband Stuart and Phyllis Porter Turner and husband Craig, five grandchildren: Jennifer Hayes Stark and husband Ryan, Jessica Hayes, Austin Turner, Ryan Turner and Harrison Turner, two great-grandchildren: Addison Stark and Slade Stark along with numerous extended family members and many blessed friends. Honoring Mr. Porter as pallbearers will be Grant Bush, Flint Miller, Josef Straughn, Leo Straughn, David Graves, Michael Miller, Harrison Turner and Ryan Turner. Honorary pallbearers will be Val Hanchey, Gary Crowe and Austin Turner. You may express your prayers and condolences to the family by visiting our online register at www.hixsonfuneral.com.

Celebration of Life services for James Edward Porter, 74, will be held Sunday, December 30, 2012, at 2:00 p.m., with Rev. Jerome Hayes officiating in the Hixson Chapel. Interment will immediately follow on the grounds of Beauregard Cemetery,... View Obituary & Service Information

The family of James Edward Porter created this Life Tributes page to make it easy to share your memories.

Celebration of Life services for James Edward Porter, 74, will...

Send flowers to the Porter family.