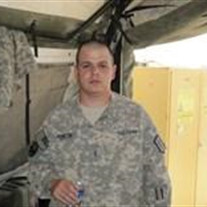 CW2 Jeremy Fenison of Las Vegas, NV (DeRidder, LA residence) passed away on September 10, 2012, in Temple, TX at the young age of 31. Jeremy was a decorated soldier from the 814th MRBC, 46th Engineer Brigade, at Fort Polk, LA. He took pride in the Warrant Officer Corps and it was his honor to be called a leader. He loved the Army and embraced his military family as his own. His service to his country was selfless and meritorious. Jeremy's greatest accomplishment in life was becoming the father to four remarkable children and marrying his mate that God chose for him while each were in their mothers' wombs, his wife of 4 years and partner of 8, Mrs. Cherie Fenison. Jeremy will live forever in the hearts of his devoted bride and his beautiful children, Juliana, Nevin, and Josan Fenison, of DeRidder, LA and Jaenae Dees of Las Vegas, NV, his father Hal Fenison and brother Jason Fenison, of Las Vegas, NV. He will be deeply missed by his three closest friends SFC Gary Polk, CW2 Chuck Bashor, and W01 Rob Owens, his fraternal brothers of the Richland Lodge No. 385 of Missouri, and the squires of the Jack Daniel's Distillery. His mother, Julie Ann Mitchell, stepmother Shirley Ann Phillips, grandmother, Evelyn DeCuir, and uncle, Darrell Anderson preceded Jeremy in death, may the perpetual light of mercy shine upon them. Chaplain Boyd will officiate the celebration of Jeremy's life on Tuesday, September 25, 2012 at 11 am at the Main Post Chapel at Fort Polk. Visitation will be held at Hixson Funeral Home in Deridder, Monday September 24, 2012 from 1 pm until 8 pm. In lieu of flowers, please make a donation to a Shriner's hospital in Jeremy's name. Words of comfort can be expressed to the family at www.hixsonfuneral.com.

The family of Jeremy Wade Fenison created this Life Tributes page to make it easy to share your memories.

Send flowers to the Fenison family.