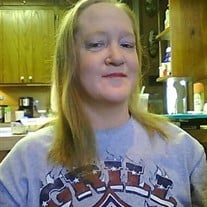 Funeral services for Jill Marinett Cooley, 52, of DeRidder will be held on Monday, March 26, 2018, at 2:00 pm at the Smokey Cove Pentecostal Church in Singer, with Bro. Clyde Clark officiating. Burial will follow in the Havens Cemetery, in... View Obituary & Service Information

The family of Jill Marinett Cooley created this Life Tributes page to make it easy to share your memories.

Funeral services for Jill Marinett Cooley, 52, of DeRidder will...

Send flowers to the Cooley family.