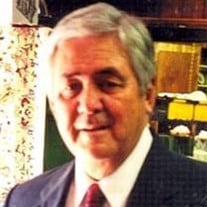 Mr. John "Jake" Mullican, 88, of Longville, LA went to be with the Lord on Thursday, April 27, 2017. Mr. Mullican was born April 13, 1929 in Basile, LA to Earl Mullican and Mable White Mullican. Jake recently celebrated his 88th birthday and upcoming 60th wedding anniversary exactly the way he lived his life-full of great food, family, and the telling of favorite stories. Although his birth certificate states he was born in Basile, Jake would heartily correct that falsehood by stating he was actually born outside of Basile in the rice fields of Redell, Louisiana. His childhood was spent in DeQuincy, Louisiana where he graduated high school in 1947. Jake's life calling was to serve all people and he began his service by entering the Army Air Corp stationed at Eglin Air Force Base in the late 40's. During his years in Florida he helped begin a Baptist mission that later became First Baptist Destin. He earned a Bachelor of History Degree at East Texas Baptist College and later a Bachelor of Religious Education and Bachelor of Divinity from New Orleans Baptist Theological Seminary. While he was there he served as Interim Public Relations Director jump starting his career in this field. When the Mullican family moved to DeRidder, Jake used his God given "people skills" to outreach to others as the Public Relations Director for BECI as well as serve as the Interim Pastor of Warren Street Missions and many various other Baptist Churches in this region. In 1984 he was hired as the Director of Imperial Calcasieu Regional Planning and Development Commission where he worked to bring development opportunities to the SWLA region. After his short 5 year retirement from ImCAL, at the young age of 78, Jake responded to an ad in the paper to serve as the chaplain of Odyssey Hospice in Lake Charles and finished out his career of service, at the job he loved the most, as the full time minister he started out his life to become. Among Jake's other life loves was performing as a Magician for the Louisiana Lions Camp and Louisiana Baptist Children's Home, faithfully attending every Rotary meeting for nearly 20 years, and teaching Sunday School as well as VBS to many of our areas children. With great love he, and all of his favorite quotes, will be remembered as a devoted husband, father, grandfather, brother, uncle, pastor, mentor, neighbor, air plane flying, pancake making, magician, food loving, coffee drinking, social seeking, people pleasing man of our Father God. "Because of our faith, it is a win win situation." Jake Mullican Mr. Mullican was preceded in death by his parents, Earl Mullican and Mable White Mullican; one brother, Thomas Mullican; two sisters, Nina Moxom and Isla Rae Procter Those left to cherish his memory are his wife, Lloydell Iles Mullican, two sons, Jeffery Mullican and wife, Denise, Jess Mullican and wife, Paige; one daughter, Jo Sarah Mullican Harrell and husband, Jeff; one sister, Eddie Claire Kent; nine grandchildren, Amy, Lauren, Sarah Beth, Jessica, Jenna, Jacob, Julia Mullican; and Will and Hannah Harrell. Visitation and services will be held Monday, May 1, 2017 at Hixson Funeral Home, DeRidder, LA from 10:00 AM until the time of service at 12:00 PM. Burial will follow in Lyles Cemetery. In lieu of flowers the family request a donation be made to a local hospice of your choice. Words of comfort may be shared with the family by visiting our online register at www.hixsonfuneral.com

The family of John Mullican created this Life Tributes page to make it easy to share your memories.

Send flowers to the Mullican family.