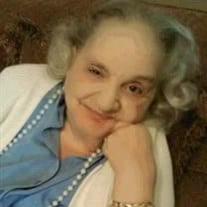 Mary Louise Jones, age 92 of DeRidder, LA passed away February 8, 2016 in DeRidder, Louisiana. She was born November 21, 1923 in Mason County, KY to Louis F. & Grace (Hayslip) Vantine. She married Wilfred Marshall Jones and he preceded her in death. Also preceding her in death is a son, Joseph " Freddy" Jones, 3 brothers, William, Lindy, and Louis Vantine Jr. and one sister, Martha Harber. Left to mourn her loss and cherish her memory are 3 sons, Michael K. Jones , and Billy R. Jones both of DeRidder, LA and Robert A. Jones of Mt. Orab, OH and three daughters, Phyllis J. Goodeaux, Sandra "Sue" Cole, and Vicky E. Curtis all of DeRidder, LA. along with 18 grandchildren, 27 great grandchildren, and 2 great great grandchildren. Funeral services will be held at 2 PM Thursday, February 11, 2016 at Hixson Funeral Home in DeRidder, LA with visitation beginning at 10 AM until the time of the service. Burial will take place at Shannon Cemetery in Mayslick, Kentucky.

The family of Mary Louise Jones created this Life Tributes page to make it easy to share your memories.

Send flowers to the Jones family.