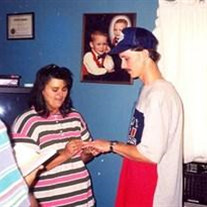 Shelia Darlene Doyle Steele, 42, of DeRidder, Louisiana entered eternal peace on Monday, January 26th, 2015 in DeRidder, Louisiana. She was a homemaker and her family was her life. She will be remembered for her strength, bravery and always... View Obituary & Service Information

The family of Shelia Darlene Steele created this Life Tributes page to make it easy to share your memories.

Send flowers to the Steele family.